Being an aficionado of all things Victorian and also of murder mysteries, I am currently devouring Anne Perry’s book Callander Square which fits the bill perfectly! Having just recently discovered her, I decided to start at the beginning of her writings and go from there. Having read The Cater Street Hangman, I am now onto her next novel which is my current read. Her style of writing is engaging and her characters follow from book to book, so one gets to really become a part of their story.

Just read Shoutin’ Into The Fog by Thomas Hanna

Now reading The Ship of Brides by Jojo Moyes

I have a few going, naturally.  I am re-listening to Lethal White by Robert Galbraith (aka J.K. Rowling) in the Cormoran Strike series.  Also listening, for the first time to Theft by Finding : Diaries 1977-2002 by David Sedaris.

Recently finished The Civil Wars of Julia Ward Howe by Elaine Showalter and In Cold Blood by Truman Capote.

Up next is The Dutch House by Ann Patchett and The Immortal Life of Henrietta Lacks by Rebecca Skloot.

Waiting in the wings are The Witch Elm by Tana French, Manderley Forever : A Biography of Daphne du Maurier by Tatiana de Rosnay, and A Better Man by Louise Penny.

I just finished Dandelion Wine by Ray Bradbury.  I picked it up decades ago but just couldn’t get into it at the time.  Throughout the years it has been referred to many times in things I have come across, so I finally picked it up again.  After all, it IS a classic so it must have something going for it.  It got me this time.  Its blend of nostalgia for more innocent times, childhood memories, and just a touch of darkness worked it’s magic on me at last.  Funny how you can reject a story at some point in your life and then totally embrace it at another time in your life.

And in reference to a section of that book, who doesn’t remember how fast you can run or how high you can jump with a new pair of sneakers?  Wonderful.

I read Where The Light Enters : Building A Family, Discovering Myself by Jill Biden. I wanted to learn more about this family and see how they handle life with its joys and struggles. This was electrifying biography of Jill Biden that did not disappoint me.  I could definitely reread the book to get more out of it and I would highly recommend it.

1.) The Starless Sea by Erin Morgenstern (2019) – I am only a few chapters into this one at the moment, but so far I am thoroughly enjoying it! – It’s about a place where are the stories of the world are kept, the sundry of ways the stories are stored (written on paper, etched into stone, threaded with spider webs, traced into the veins of leaves), and the people who protect them.

Blurb: “Zachary Ezra Rawlins is a graduate student in Vermont when he discovers a mysterious book hidden in the stacks. As he turns the pages, entranced by tales of lovelorn prisoners, key collectors, and nameless acolytes, he reads something strange: a story from his own childhood.

Bewildered by this inexplicable book and desperate to make sense of how his own life came to be recorded, Zachary uncovers a series of clues – a bee, a key, and a sword – that lead him to a masquerade party in New York, to a secret club, and through a doorway to an ancient library hidden far below the surface of the earth.

What Zachary finds in this curious place is more than just a buried home for books and their guardians – it is a place of lost cities and seas, lovers who pass notes under doors and across time, and of stories whispered by the dead. Zachary learns of those who have sacrificed much to protect this realm, relinquishing their sight and their tongues to preserve this archive, and also of those who are intent on its destruction.”

2.) The Outlaws of Sherwood by Robin McKinley (1988) – Recommended to be by the lovely Miss Ann! I am about halfway through this book, and it’s been an extremely fun/interesting read so far. As the title might suggest, it is a retelling of the story of Robin Hood, Marian, and the gang of Merrie Men; for me, it truly is a completely different look at these characters of legend. The biggest plus for me, is that McKinley doesn’t start off the story with Robin and his men already being folk-hero legends, she allows the reader to join in on their journey to their more familiar roles of protectors of the poor.

Blurb: “There have been many tales and ballads about the man we know as Robin Hood, and the lady Marian, Little John, Will Scarlet and the rest. But Newbery medalist Robin McKinley brings her unique gifts of storytelling to the familiar legends, and creates an original and compelling novel. – In the days of King Richard the Lionheart, a young forester named Robin set out one morning for the Nottingham Fair. But he never arrived. By the end of the day a man lay dead in the King’s Forest, and Robin was an outlaw with a price on his head.”

I recently finished The Death of Mrs. Westaway by Ruth Ware for our book discussion group.  The book was very discuss-able for the group, with more likes than dislikes.  The main character is a Tarot reader in the story, and as someone who read cards myself, that piece interested me.  I felt that the cards could have been better used throughout the story.  Hal, (the protagonist) reads cards, and refers to herself as a “cold reader”.  This is basically a person who has memorized the cards, but is using the body language, verbal and non-verbal responses, as well as social media as a way to read her clients.  I found, in reading the interview questions in the back of the book, that the author had never had a Tarot reading, nor studied the cards.  All of her information came from books that she had used.  I have to say that piece left a bit of a bad taste in my mouth.

Another book I have going is Animal Farm : The Graphic Novel by George Orwell ; adapted and illustrated by Odyr.  It’s been many years since I originally read the book, so this is sort of a fun way to remember a title.  Recently, I have found several of the more “classic” novels in this form and have enjoyed them in a different way.

I just checked out an audio book – The Rosie Result by Graeme Simsion.  This is the third book in this series, and I am looking forward to it!

Earlier today I finished The Black Lung Captain, a steam-punk style fantasy adventure written by Chris Wooding.  This is the second title in the series Tales from the Ketty Jay, (which refers to the name of the airship on which much of the story takes place).  The plot revolves around the crew of the Ketty Jay joining the captain of another craft, (who suffers from the “Black Lung” disease), on an expedition to retrieve a mysterious artifact from a crashed airship in the savage wilds.  The downed airship turns out to be from the supernatural civilization that lives at the North Pole, cut off from the rest of the world by a band of violent electrical storms.  Plenty of air battles, gun fights, and other steam-punk style action ensues.

Chris Wooding does an excellent job keeping the story moving, while allowing every member of the eight person crew to grow and develop over the course of the book.  The story is engaging and action-packed, with stakes that are both serious and easy to understand.  Readers will discover a fine mix of drama, comedy, tragedy, and romance, without any of those themes overwhelming the entire plot.  Fans of the science fiction TV shows Firefly and Independence would probably find this an enjoyable read.  The series starts with the previous title, Retribution Falls.  I would recommend reading that title first if you want to get the most out of this book, although it is not strictly necessary.

I enjoy talking about books, but sometimes, I draw a complete blank when I get questions like “What do you recommend?” ; “Who’s a good author?” ; “What is your favorite book?”.  These are all great questions, and my answer, can and does change often.
I have a few questions that I ask the person asking me – confused yet?  I find out what author(s) a person likes, and why.  Is there a specific genre that my new acquaintance likes – mystery, fantasy, western, science fiction, humor, historical, or whatever else they mention, yes, even erotica.  About half the time I can come up with a title, and my friend is a happy camper.
But . . .
There are times when this new friend and I must move on to other resources.
One of my favorite go-tos is NoveList Plus, which can be accessed from our website, though you will need a valid library card.  You can read my previous blog post about some uses for this website.  This is a very useful resource when searching for specific author read-a-likes.
Another fun place to find new authors, music or movies is Gnod.  This one is interactive, but in a different way.  Once on the website, I generally opt for Gnod Books, though Gnod Music and Gnod Movies are great as well, and work the same way.  If my new friend mentions more than one author as a favorite, Gnod’s Suggestionsgives me a place to enter up to three authors, and then gives me suggestions of other authors to consider.  Map of Literature uses one author but brings in many suggestions.  This feature is fun to play with, as the authors float around the screen a bit and settle near each other, as read-a-likes.
One more interesting resource is What Should I Read Next?  This one works well if there is a very specific title my new reading buddy likes, but I find it not as useful to look up an author.  It does give you the author and the majority of their work, but you still have to narrow by title.
Last, but by no means least, is adding another perspective to our conversation.  Often times, my co-workers have exactly the suggestion we’ve been looking for! 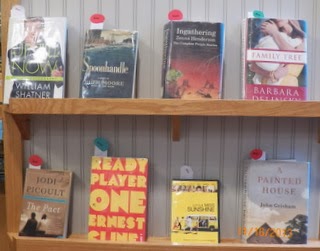