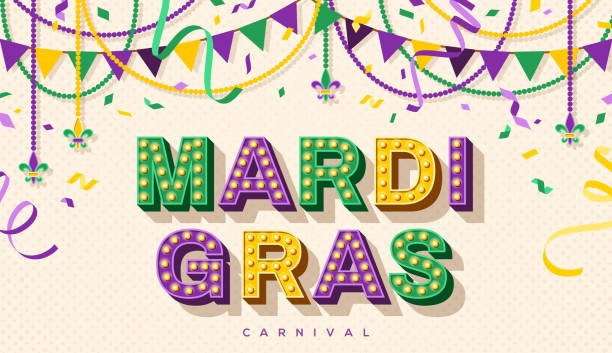 What is Mardi Gras?

Mardi Gras (also known as Fat Tuesday or Shrove Tuesday) is a Christian holiday (and now a popular cultural phenomenon) that dates back thousands of years to pagan spring and fertility rites. It’s celebrated in many countries around the world on the day before the religious season of Lent begins.

-The term “Carnival” technically refers to the period of revelry and feasting that begins on January 6 (the Feast of the Epiphany) and ends on Mardi Gras. [The derivation of the word Carnival is uncertain, though it possibly can be traced to the medieval Latin carnem levare or carnelevarium, which means to take away or remove meat.]

(Pieter Bruegel the Elder: The Fight Between Carnival and Lent)

-The name “Shrove Tuesday”, comes from the practice of “shriving”— confessing ones sins—prior to Lent. For many Christians, Shrove Tuesday is a time to receive penance and absolution.

– In French, Mardi Gras means “Fat Tuesday.” (Mardi/Tuesday and gras/fat.) At one time the rules around abstinence during Lent was much stricter than it is today. In the past, Catholics were forbidden from consuming meat byproducts as well as from meat. The name “Fat Tuesday” comes from the tradition of using up all of the milk, eggs, butter, and other fats in one’s home before Lent. 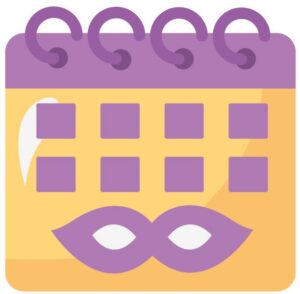 When is Mardi Gras?

The Carnival season however, is much longer than just one day. Carnival begins on The Feast of Epiphany/Three Kings Day (January 6th) and ends on Mardi Gras (this year March 1st) which is always the day before Ash Wednesday and the start of the Lenten season in the Christian faith.

(*Easter is traditionally celebrated on the first Sunday following the full moon; the “Paschal Full Moon.” that lands on or after the spring equinox. The Christian calendar states that the vernal equinox (spring equinox) always falls on March 21. [Scientifically the date of the equinox varies between March 19 and March 22.] This year, the first full moon after the vernal equinox won’t happen until April 16th, which means Easter falls on the following Sunday, April 17. If the first full moon falls on a Sunday, Easter is celebrated the following Sunday.)

The historical origin of Carnival is somewhat obscure. According to Laurie Wilkie, an archaeologist at the University of California at Berkeley, Carnival celebrations began before Christianity as a pagan fertility festival. 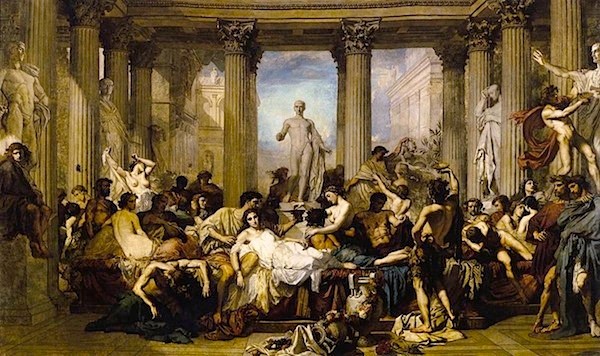 Some scholars believe it may have been linked to the raucous Roman pagan feast, Saturnalia, which honored the god of agriculture and time: Saturn. Others believe it may have been linked to Lupercalia one of the oldest Roman festivals, conducted annually in early February, meant to: celebrate love, purify the city from evil spirits, and to aid with fertility. (You might remember this name from out Valentine’s Day Blog!) Others still, believe there is no connection and the customs may come from much older Indo-European spring lore and perhaps the folklore of the Germanic and Slavic races rather than from Rome.

When Christianity arrived in Rome, in the hope of curtailing certain beliefs, the Church found a way to incorporate them into their religious calendar; which was much easier than trying to abolish them all together. And so, the carnival practices in Rome continued within the framework of the Church.

Mardi Gras is believed to have arrived in North America on March 3, 1699, when the French-Canadian explorers (and brothers) Jean Baptiste Le Moyne Sieur de Bienville and his older brother Pierre Le Moyne d’Iberville camped about 60 miles downriver from the future site of New Orleans. Knowing it was Fat Tuesday they held a small celebration and dubbed their landing spot Pointe du Mardi Gras. 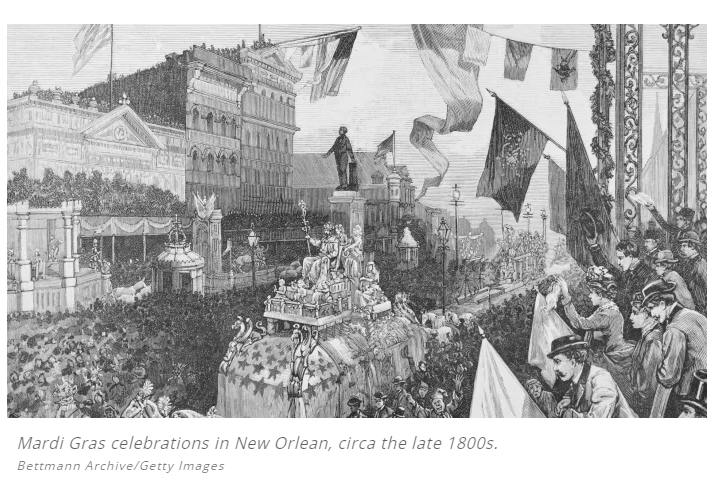 Mardi Gras was celebrated in New Orleans soon after the city’s founding in 1718. The first recorded Mardi Gras Street parade in New Orleans took place in 1837. In 1856 the Krewe of Comus was formed, and they introduced the idea of floats in parades the very next year: 1857. Now a major metropolis, New Orleans is the city most known for its extravagant celebrations with parades, dazzling floats, masked balls, cakes, and of course large quantities of alcohol.

A krewe – pronounced like “crew” – is a private social club/organization that puts on a parade, ball, or other such festivity during the Carnival season. The term is believed to have been coined in the early 19th century by an organization called Ye Mistick Krewe of Comus, the group that put on the first parade in the city with themed floats — the model for future parades — in 1857. The Mistick Krewe of Comus itself was inspired by the Cowbellion de Rakin Society who had annual parades in Mobile, Alabama starting in 1830. 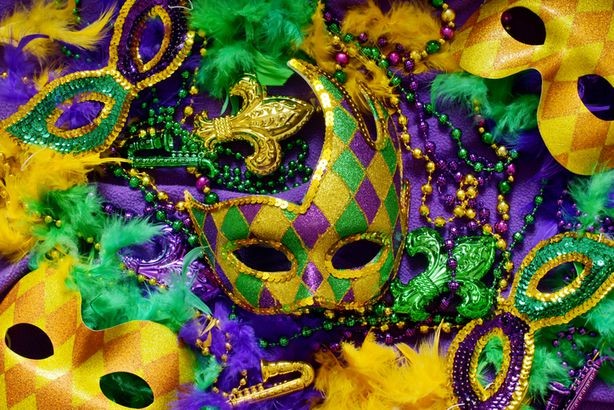 Masks are one of the most popular Mardi Gras traditions, and an integral part of the Mardi Gras culture. During early Mardi Gras celebrations hundreds of years ago, masks were a way for their wearers to escape class constraints and social demands; remaining anonymous, hiding their status, gender, age, and even their religion. Masks gave attendees the ability to engage in deviant behavior without retribution. (Unless you were a woman, then you ran the risk of damaging your reputation either way.)

Today, everyone wears masks during Mardi Gras. In fact, float riders are required by law to wear masks.

Parades (organized by the krewes) are a huge part of the festivities, and there are dozens of them throughout the month of February leading up to the day of Mardi Gras. During the parade, each krewe has a signature “throw,” (such as beads) that they throw out to the parade watchers.

After a krewe finishes its parade, they often throw a lavish ball or party. Typically, an invitation is required to attend the party, but anyone can sit and watch the parades.

The official Mardi Gras: New Orleans website has videos from past Mardi Gras that give you an idea what the parades/balls/etc. are like: https://www.mardigrasneworleans.com/videos 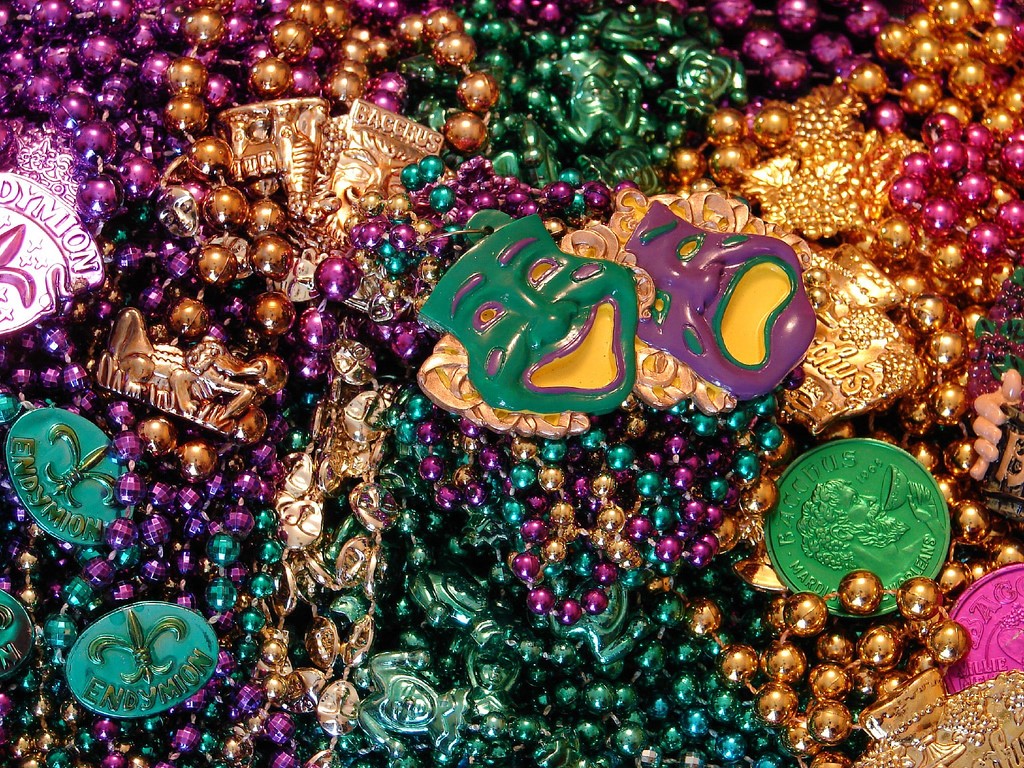 Throws, as the name implies, are exactly that: trinkets that krewe members on floats throw to parade-goers. Throws often include the ever-popular beads, as well as doubloons, cups, custom-designed medallions, even coconuts! The idea for throws likely took inspiration from the tradition of “throws” by the Twelfth Night Revelers in the early 1870s.

Though the distribution of small gifts had existed in a trivial capacity in New Orleans parades since the Twelfth Night Revelers in the early 1870s. the Rex Organization, which parades on Mardi Gras Day, dramatically expanded this practice in the late 1890s/early 1900s with each individual float tossing items to eager onlookers.

Through the 1950s and 60s, parade riders enticed crowds with glass beads primarily made in (what was then) Czechoslovakia. The market then jumped from Czechoslovakia to Japan with the popularity of the much cheaper “bugle bead,” before again shifting to China where almost all of the modern production occurs.

*IMPORTANT: Remember when it comes to celebrating Mardi Gras: flashing for beads is NOT considered a tradition by the locals. Police officers might be somewhat lenient about that sort of behavior on Bourbon Street, but it isn’t tolerated along the parade routes. Parade-goers leave Mardi Gra with a ton of beads by just giving a smile, a wave, or a “Throw me something, mister!”

Mardi Gras is filled to the brim with royal court parodies. Most krewes select a royal court each year, consisting of a king, a queen, dukes, and maids. The method of selecting a king varies from krewe to krewe. Some krewes hold random drawings, while others invite a celebrity guest to be their king. For example: Endymion, the city’s largest krewe, picks its king by lottery at its coronation ball.  Twelfth Night Revelers and Okeanos announce their queens the night of the ball, and the society clubs, most of which do not parade, select their queens and maids from the annual coterie (the in-crowd) of debutantes.

However, only one king reigns supreme: Rex (Latin for King) is considered the King of Mardi Gras and the leader of the festival celebrations. Rex is chosen by the School of Design, who sponsors the Rex parade, and is always a prominent member of the krewe with a long history of community service. His identity is revealed the day before the parade.

The annually-selected monarch receives a symbolic golden key to the city, and he in turn decrees that it’s time for the city to shut down and celebrate. The King of Mardi Gras sits on his throne during the Rex Organization’s parade and he and his Queen preside over the Rex Ball, Carnival’s glittering conclusion. 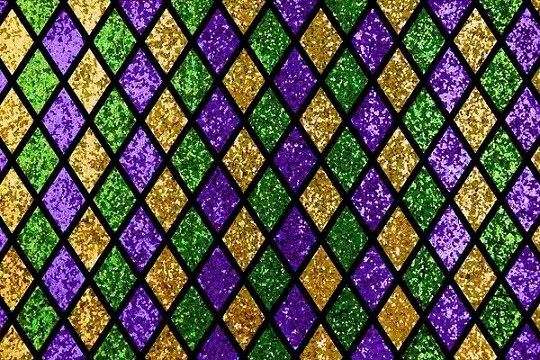 The colors of Mardi Gras (purple, green, and gold) were selected by the Krewe of Rex (aka the Rex Organization, aka the School of Design), in 1872. Some believe that the colors were chosen in honor of the Russian Duke, Alexei Alexandrovich Romanoff, but really the history behind the colors is a mystery.

During the 1892 “Symbolism of Colors” parade, the Mardi Gras King assigned a meaning to each color. The colors are now recognized as: Purple for justice, green for faith, and gold for power.

Here’s a deeper look at the meaning behind the colors: https://www.mardigrasneworleans.com/history/traditions/colors 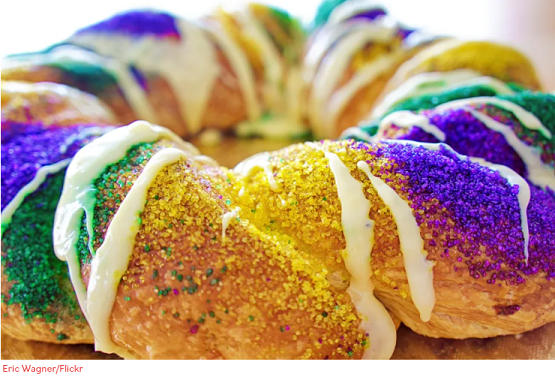 Only eaten during the Carnival season, a King Cake is an oval-shaped cross between a French pastry and a coffee cake, topped with icing and sugar/luster dust and decked out in Mardi Gras colors (purple, green, and gold.)

According to Caluda’s King Cake shop the first King Cakes were made in Europe in celebration of the Catholic Epiphany, also known as Three Kings Day, the day when the three wise men/kings were said to have visited baby Jesus and showered him with gold, frankincense, and myrrh. It is believed that the King Cake was brought to New Orleans by the French in 1870.

A miniature plastic baby, which represents baby Jesus, is placed inside of each cake. Tradition says whoever gets the piece of cake containing the baby is supposed to provide the king cake for the next gathering.

“Mardi Gras Guide” publisher Arthur Hardy claims more than 750,000 King Cakes are sold each year in New Orleans during carnival season, and thousands more are ordered from special bakeries and shipped to celebrants around the country.